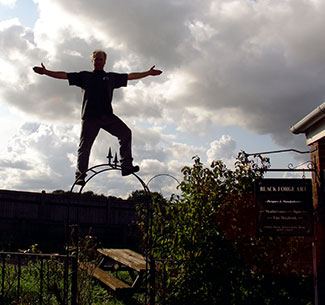 ‘The origins of Black Forge Art lie in an old farm building deep in the heart of rural Kent, where Rod Fender, design engineer, artist blacksmith, creator and displaced itinerant Northerner built a forge and began designing and manufacturing an impressive range of iron and steel artwork.


His enthusiastic and original approach rapidly led to plenty of orders and an extensive, continually growing collection of ideas and designs.


"My original aim was to combine top quality metalwork and blacksmithing with a large element of artistry, animation and detail previously unknown in this type of work. As a qualified engineer I managed to blend my previous career with artistic inclinations to develop a craft both unique and distinctive which I appropriately named 'Black Forge Art'. I always tried to ensure perfection and detail, whatever the commission or construction, and regardless of whether the design was my own or working from a photograph, sketch or idea supplied by a customer, I went to great lengths to bring as much life, movement, realism or humour into the finished piece as possible."


It is still this continuing 'perfection without compromise' approach to his work that twenty five years later has led to many thousands of satisfied customers now owning an original Black Forge Rod piece of metal artwork, throughout the UK and increasingly, worldwide. 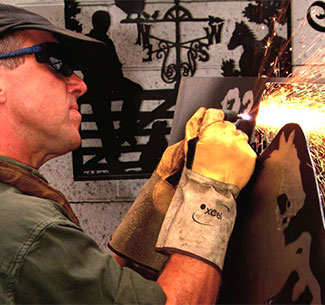 Nowadays, despite complaining about where the last twenty five years have gone, with impressively undiminished enthusiasm, Rod, with assistance from his team of like-minded blacksmiths, welders, wife and now we, now grown up, children, all still strongly adhere to those original principles.


Whatever your order, the final result will be a substantial piece of impressive metalwork, both original and timeless, which has been manufactured to a quality designed to last a lifetime and guaranteed to give your property that traditional finishing touch, transforming it into a landmark seen and admired by all.


Nowadays, while Rod continues to concentrate on the artwork, while still ongoingly hand cutting his designs and overseeing the completion of commissions, he enjoys having his family and team of workers/friends all pulling together.


However, despite our team of six, due to the individualistic nature of our work and ever increasing demand, he does warn that, commissioning an order well in advance of a specific deadline is often required, and he can regularly be heard quoting to customers such gems as.- 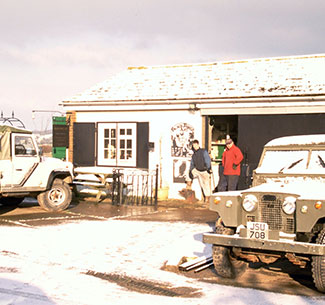 
Meanwhile, our small, rural, family orientated Black Forge world keeps steadily revolving, so far untroubled by turbulent global financial climates, the dodgy dealings of big global corporations and climatic calamities induced by global warming, and in its own plodding but satisfying way keeps going from strength to strength, - long may it continue so.’

What our customers say

Thank you so much for our beautiful sign; I was able to view it in situ before it was covered up. Several other people were also able to see it and thought how magnificent it looks.

I will send you photos after the unveiling on Saturday and Richard has asked for some as well. May I say how helpful the chaps were; they found the cable to the street light that we were cautious about but it caused no problem.

Thank you once again and I hope you will be able to come over some time and see the sign for yourself.

Best wishes
Geraldine, Chairman, Yalding P.C.
Many thanks for your patience, professionalism, tenacity, craftsmanship and good humour over the past year. A great conclusion with the unveiling of our delightful new Village Sign and the spitfire fly pass and lovely short film that captures the spirit of the day.

Marc Stevenson
Chairman, Resisdents Committee, Ewhurst Green
I’ve been asked to pass on particular (and slightly belated!) thanks from our committee for the excellent village sign that was installed on the Green recently. The Council is delighted with the results and with the quality of your firm’s work, as well as the very high level of customer service your firm gives to its customers. Your commitment to hand-delivering the sign was key to enabling the project to complete successfully on schedule, and we’re sure that the sign will be much enjoyed and admired by residents and visitors for many years to come. I thought you would like to see a photo of the completed work, although I will forward another photo once the protective netting around the new turf has been removed.

Many thanks again to all at Blackforge,

Kind regards,
Sue, Clerk to the Parish Council, Bourton on the Water